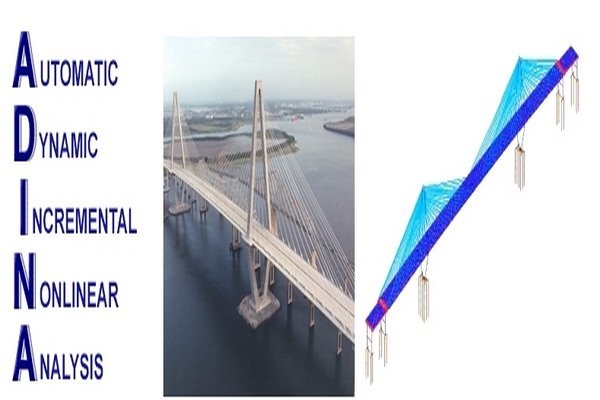 ADINA (Automatic Dynamic Incremental Nonlinear Analysis) is a universal program based on the finite element method used for engineering linear and nonlinear calculations. ADINA allows to solve structural and temperature problems, calculate current, carry out multiphysical and electrostatic simulations. Implementation of the program in the development or production of a product is the best solution to reduce the cost of producing prototypes and reduce the time of their testing. Modern computational methods that underlie the ADINA program distinguish it from other programs due to accurate and reliable results for solving nonlinear problems. The main functionality of the package:

The ADINA System package consists of the following modules:

ADINA Structures is a module for calculating the static and dynamic strength of solids and structures. The calculation can be carried out both in linear and in highly linear formulation, taking into account the nonlinearity of the material, large deformations and contact.
ADINA CFD is a software package for simulating the flow of compressible and incompressible fluids using finite volume and finite element discretization.
ADINA Thermal is a software module for solving heat transfer problems in solids and structures.
ADINA-FSI is a module designed to analyze the interaction of flow and structure, and it is possible to consider the highly nonlinear behavior of a material due to large displacements, inelasticity, contact and temperature dependence.
ADINA-TMC is a software module designed to solve related thermopower problems when thermal phenomena affect strength properties, and vice versa.
The ADINA User Interface (AUI) is a pre- and post-processor module that makes it possible to create and edit geometric and finite-element models and visualize the calculation results. Compatible with all modules of the complex.

Review: Ready for Final Fantasy 7 to define yet another generation?