iPhone Gaming
Swapperoo [$0.99] is the latest title from Fallen Tree Games, developers of the wonderful Quell series. It released a bit late and kind of missed the whole weekly release post thing, but that's no reason for it to fly under the radar, it's too stinking awesome! Somehow, Fallen Tree has managed to make a match-3 game that's actually interesting, unique, and highly strategic. I figured that train had sailed from the airport a long time ago, but I'm happy to have been proven wrong.

The most unique thing about Swapperoo is its core matching mechanics. You have squares, triangles and circles made up of various colors. Your goal is to match 3 or more of the same color shape to clear it from the board, with the remaining shapes falling down into the newly-created gaps and new shapes entering the screen from the top. Very standard stuff. The kicker is that square shapes can't be moved at all, triangle shapes can only be moved in the direction they're pointing, and circles can be tapped in order to clear them. That may not sound like much, but it creates some incredibly strategic opportunities for making matches and effectively clearing a board. If you're able to recognize the layout of a board and think a few moves ahead, you can set up some seriously cool combos, and it's very rewarding. 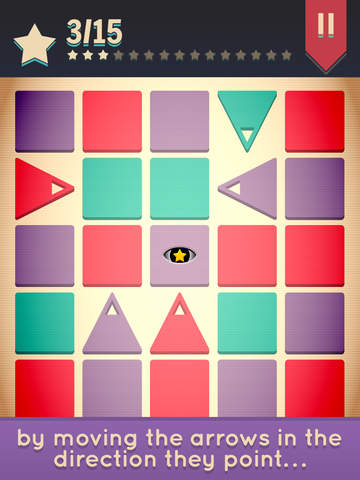 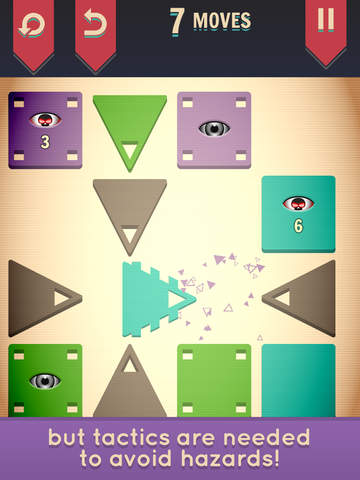 Swapperoo isn't your typical matching game where you match as long as you can going for a high score, it's actually more like Candy Crush. Wait, don't run away! What I mean is that the first 38 levels slowly introduce new requirements in order to be beaten. At first it's easy, just clear the required number of blocks to proceed. Then it starts being about clearing X number of a certain color of block, or clearing just left-facing triangles, or clearing a certain number of shapes with a star on them. Things like shapes that must be cleared within a certain amount of moves or "armored" shapes that can't be swapped add spice and difficulty to the game.

Oh, and then a few levels in the game becomes sentient and starts playing itself.

Yeah, that's just one of the many surprises waiting for you during the course of those 38 levels. I'm only about a third of the way through at this point, but I can't wait to see what other crazy things Fallen Tree has dreamt up to throw at me next. New shape types that behave slightly differently than the normal ones, new level requirements, and I'm sure much more. While those initial 38 levels start off with a randomly-generated board and task you with fulfilling the level requirement to pass, the second half of the game is actually 75 pre-built puzzle levels that task you with using the game's mechanics to clear the board in a number of interesting ways.


I feel like saying anything more is just spoiling Swapperoo, so if anything I've just described sounds remotely interesting, you should definitely check it out, and people in our forums are quite taken with the game so far as well. Even if you've got match-3 games coming out your ears and the thought of another match-3 game makes your eye twitch and your stomach churn, I promise you haven't played a matching game quite like this one before.