iPhone Gaming
Match-three is one of those genres that will be around forever. Years after we're immersing ourselves in full consumer-grade VR, Match-three will still be rampant on portable devices and wearable tech. It's inevitable. But while many of them stick to the same formula, CombineRobot [
Please, Log in or Register to view URLs content!
] aims to do something different -- both thematically and mechanically -- and I admire it for that.

What I really like about Robot is that it. Instead of matching the same objects over and over, the game is dynamic and presents a new puzzle for every turn. Set to the tune of a city highway, cars are displayed in a 4x5 grid format. They range from vans to sports cars to sedans, all of which are immediately recognizable from one another. At the top of the screen, a specific combination will appear (such as van, van, sports car), and it's your job to locate a possible combo and swipe it. You can swipe in any direction you choose, as long as you swipe in a line of some sort (think Tetris shapes).

But Robot is keen on mixing things up, having you search for combos that may not be apparent at first glance, which is part of its charm. There's also power-ups on-screen with bonuses like extra time, and they're deliciously designed with an arcade aesthetic. What really powers me through though is the wonderful pixel art, retro soundtrack, and on-point sound effects. 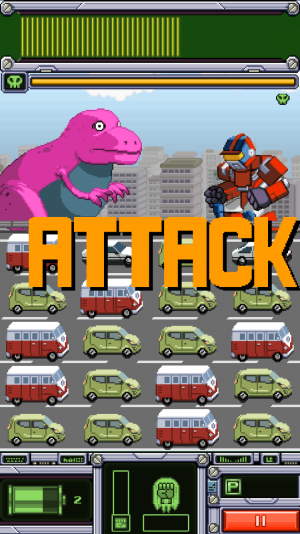 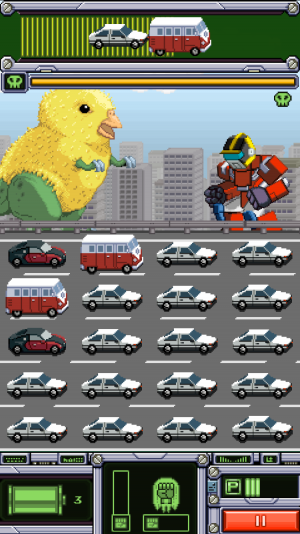 There's also a little show to watch as players progress through a level in the form of a mecha-fight with various boss characters. From a gigantic Barney the dinosaur to a freaky lizard chicken you'll fight unique threats, and assemble your robot by way of the solved car parts. Once your hero is built it's time to fight, which can be done by solving more car puzzles or pressing an ability button.

If I had one criticism it's probably in regards to the pacing. It would be nice to see a smaller lead time when it comes to building the mech, and then a more difficult fight once it's completed. Instead the game maintains a steady tone, where every phase is nearly identical. It would be a bigger problem if it wasn't as addicting, however, as I always wanted to see what monster I'd fight next.

As you progress you'll start to earn more parts for your mech, including new head, body, arm, and leg pieces. Most of these items are inconsquential and cosmetic, and aren't tied to IAP of any kind. Other than that, there's no real experience system to be had -- so if you aren't into customization, there isn't going to be a lot of positive reinforcement going your way.

If you like kaiju flicks and want to try a unique puzzle game, give CombineRobot a whirl for a buck. Once the allure wears off it does feel a bit more conventional than it does at first glance, but there's enough content there to keep you busy.

Which big smart screen is right for you? Nest Hub Max or Amazon Echo Show