I have always been extremely fascinated by the Victorian Period. Its aesthetics and 19th century industrial technology definitely allure me more than other periods of time. However, I am an even bigger sucker for Neo-Victorian (A.K.A Steampunk) aesthetics and its different technologies. I think they are a unique mixture of different aspects that you wouldn't initially imagine to be together. My choices in playing past games such as Dishonored and Bioshock Infinite were definitely influenced my my fascination with Victorian science fiction. These aforementioned personal fun-facts are why I absolutely had to try out Noblemen: 1896 [
Please, Log in or Register to view URLs content!
] by Foursaken Media.

Noblemen: 1896 takes place in an alternate reality of (you guessed it) 1896 where a plague has killed around 70% of America's population. Unfortunately, this provided an opportunity for the worst of men to try to seize power over the crippled government and its vulnerable citizens by spreading lies and deception. They eventually convinced half of the nation to turn against the government and an all-out civil war ensued. This is where you come in. You are a Nobleman who needs to lead the fight against these deceived aggressors. The game's plot is periodically fed to you through small sequences of text that are spread throughout a surprisingly large campaign. It's nothing to write home about but it sufficiently gets the job done and gives you just enough detail to understand the war at hand. 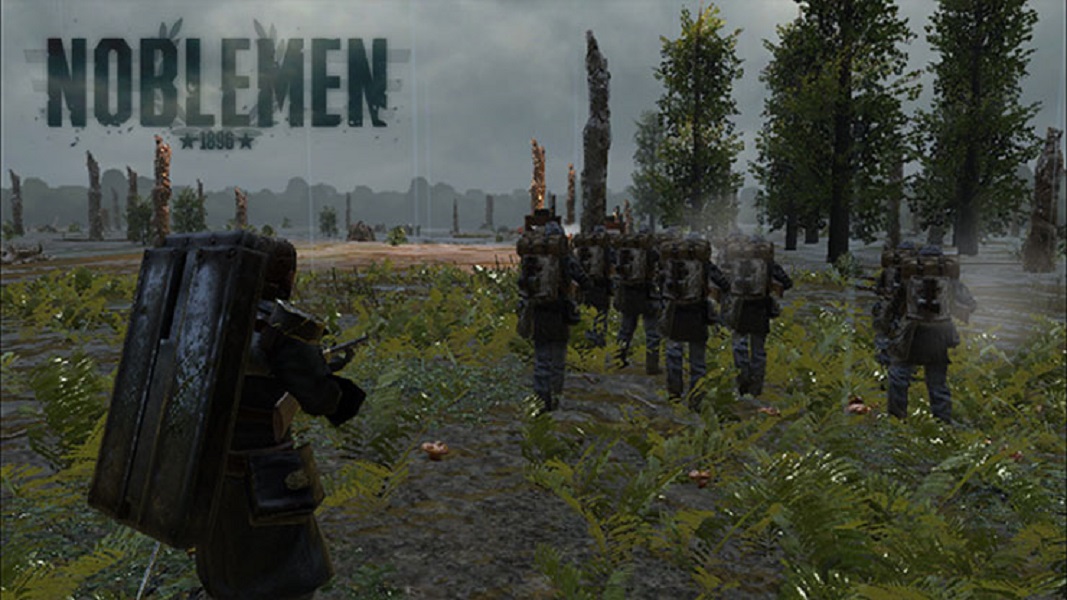 There is quite a bit going on in the gameplay department of Noblemen: 1896, to the point where it was a bit overwhelming for me at the beginning. The best way I can describe it in a nut-shell is that it's a mixture of turn-based strategy (like Advance Wars), real-time strategy, and a third-person cover shooter. Obviously, this isn't your average blend of elements for a game, especially on the App Store.

The game presents you with a pretty decent tutorial that walks you through its gameplay mechanics, one step at a time. There is an option to play through the game's campaign or fight in skirmishes. You begin each scenario of the campaign on a grid-based map where your base, your units, your armies, supply depots, strategic points, enemy units, the enemy base, and other things are displayed. I must convey that I love the aesthetics of the map. The map is presented as a large piece of parchment with a variety of items scattered around its edges, such as a lantern, candles, revolver, and bullets. It definitely helped me feel like a real commander carefully planning out my army's next move while inside a tent near the front lines.

Anyways, every time you move your units around the map they consume supplies. If they don't have the necessary supplies required to facilitate movement, they become exhausted and must be resupplied. You can resupply your units from supply depots at certain locations on the map. Supply depots also heal your units and provide combat bonuses for them. Your units can also capture strategic points that take two turns to capture. Capturing these points charges your "Earthshaker Cannon", which can directly attack the enemy's base. However, you can also attack the enemy's base with your armies instead of trying to solely use the Earthshaker Cannon. This aspect causes you to juggle defending points while attacking others. You can use battle cards to give you the upper hand in certain situations at the cost of using Battle Points. Battle Points are acquired from maintaining control of supply depots and strategic points on the battlefield and can also be used to procure more units. Battle cards can turn the tide of battle and effect units/places on the map in a wide variety of ways. 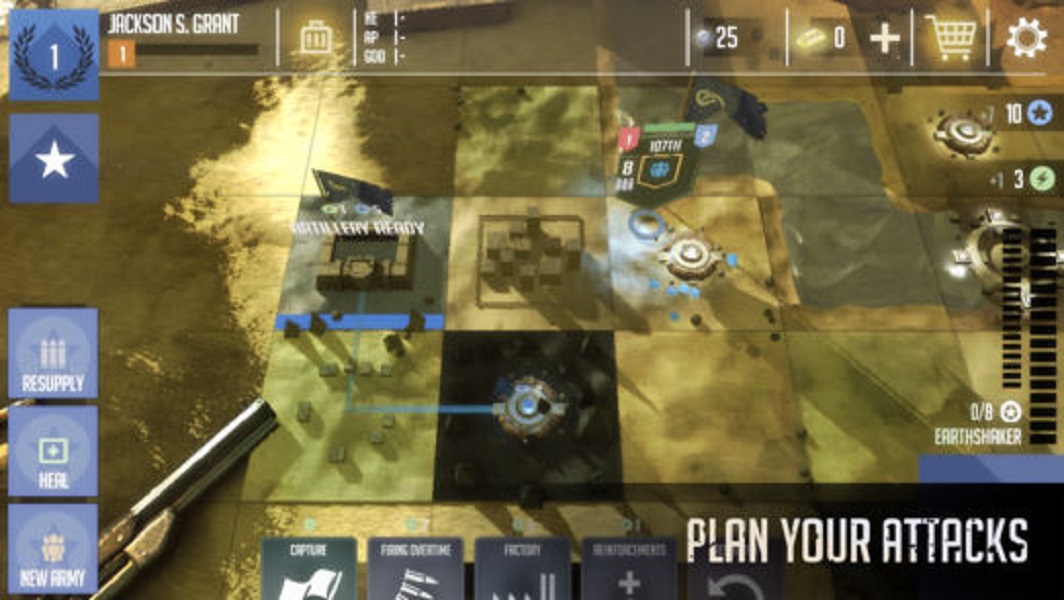 The only problem I had with the turn-based strategy aspect of Noblemen: 1896 is that the maps felt quite small for a good chunk of the game. I feel as though there wasn't much strategy involved with moving my units because of this fact. This continued until the latter half of the game when the map size increased and I (as well as my enemy) had a larger variety of units at my disposal. Once I reached this point in the game the turn-based strategy sections didn't feel as tacked on and mindless.

Once you encounter enemy armies and attack, you are thrust straight onto the battlefield as a Nobleman. Your Nobleman can be outfitted with different armor, weapons, and ammunition before each of these battles. Once in battle, you enter a third-person perspective where you can strategically maneuver your way around a decently large battlefield while taking cover behind various objects. You also have a command prompt that delivers you an overhead view of everything on the battlefield, which you can utilize at anytime during a battle. There are options to command each of your armies to target certain enemies, move to certain locations, stop, follow, and protect. Once you give your orders you can watch your men carry them out. Directing your armies and simultaneously participating in the action yourself is quite a fun experience. There is even an option to have the battle play out by itself without any input from the player, although it takes each encounter significantly longer to finish by using it.

However, the early battles I participated in felt extremely empty for the first half of the game until I unlocked more units/armies to fill up the battlefield. It almost felt like multiple games of hide and seek, where I watched my armies (as well as my Nobleman) constantly run across empty landscapes after the enemy. This became stale pretty fast until new units mixed up the action, as I mentioned before. It's important to note that I occasionally found myself getting stuck against objects in the environment, such as buildings, rocks, and cover. 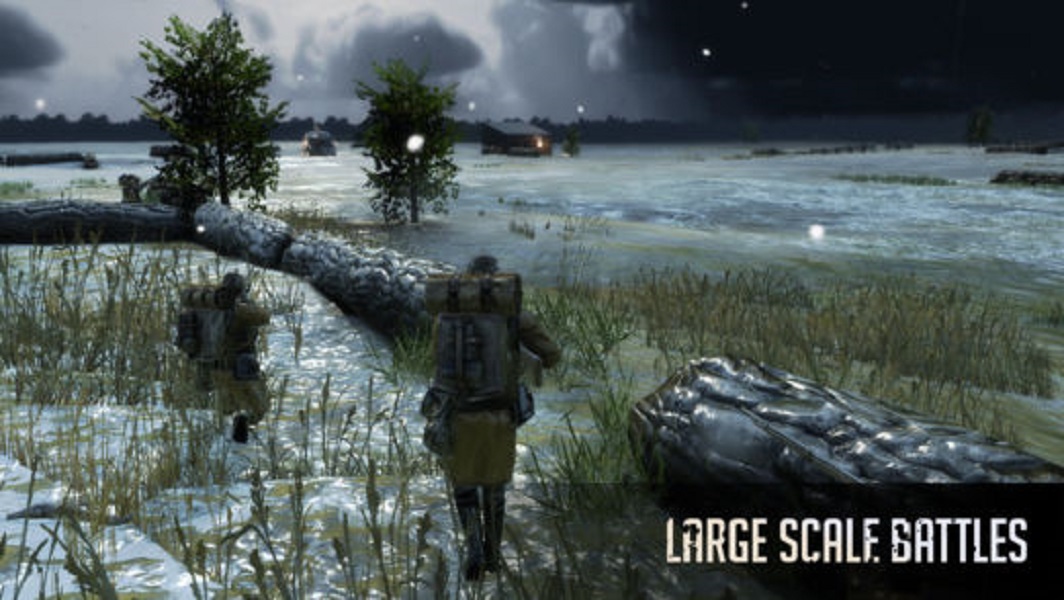 The controls were adequate and you can adjust their sensitivity to your liking. However, there is no option to move around buttons or change their size. Despite this, something feels a bit off with the the controls during the third-person sections of the game but it's not enough to make the gameplay experience suffer or feel uncomfortable. I can't quite put my finger on it. When in the thick of the action there are button prompts that appear to enable a faster reload of your Nobleman's current weapon. There is also melee combat that happens automatically when you get close enough to an enemy. You only have to hit the occasional button prompt during these clashes between swords. I didn't really enjoy this hands-off approach to melee combat, which I think should have been more interactive.

I also want to add that playing Nobleman: 1896 will eat your battery alive. I have never experienced an application that has drained my battery faster. If you want to play the game with it's default settings, make sure your device is fully charged or make sure to have a charger on-hand. Fortunately, there are options to tone down the graphics of the game to minimize battery consumption. These options helped out a bit but my battery still seems to drain at a surprisingly fast pace. Also, strangely enough, my iPhone 7 Plus became ridiculously hot throughout my time with the game. Altering the graphical settings didn't seem to help in the slightest.


Please, Log in or Register to view URLs content!
Lastly, this is a free game and the developers rightfully included methods of monetization. New units, armies, armor, officers, and battle cards can be obtained through chests that are purchased with gold currency. Each chest has specific contents and a different chance of giving various rarities of supplies. There is an option in the shop to purchase a small number of specific supplies that you desire with gold as well, which doesn't involve any RNG. If you don't find anything that you need, you can wait for the selection to change up every so often.

Gold and silver currency is earned through playing the game or through IAP's. Silver is used to upgrade your units. You can also receive gold and silver after certain amounts of time pass by, regardless of whether you are playing the game or not. Do you want to buy a chest with better chances and unlock/upgrade more units? You better play the game and login consistently to get your gold and silver. I liked this aspect to the game. It felt like I was constantly piling my currency, even when I was away from the game. You can experience the entirety of what the game has to offer without spending a dime. I never felt like I needed to spend money in order to progress at a steady pace. The IAP's are only there to speed up unlocks/progression and that's it. I gratefully commend Foursaken Media for this specific fact.

All in all, Nobleman: 1896 has an extremely unique blend of ideas and mechanics that show their potential at the beginning of the game but don't quite hit their stride until the latter half of the game. However, if you learn the game's various mechanics and press forward through its slightly repetitive beginnings, there is a unique and strategic experience to be had. Remember, it's free and you have nothing to lose by trying it out. Don't forget to check out other people's impressions of the game in our
Please, Log in or Register to view URLs content!
and feel free to leave impressions of your own!