iPhone Gaming
The iOS version of Sirlin Games' Puzzle Strike [
Please, Log in or Register to view URLs content!
] is a tricky game to review. This is a fantastic game, if you're into deckbuilding games with a high degree of interactivity, and while it plays pretty well on mobile, there are some glaring omissions that detract from what would've been a mobile gem (pun intended). Still, even with issues like a lack of proper notifications and questionable UI decisions, Puzzle Strike is a great addition to the App Store and should more than satisfy those looking for a game that's easy to grasp but can take forever to master. While it definitely shines as a multiplayer game, Sirlin has packed the game with plenty of single-player content too like a pretty strong AI to play against as well as 10 Challenges that will test your skills and help you discover the game's strategic nuances. So, a great deckbuilding game, and a good mobile game, too. 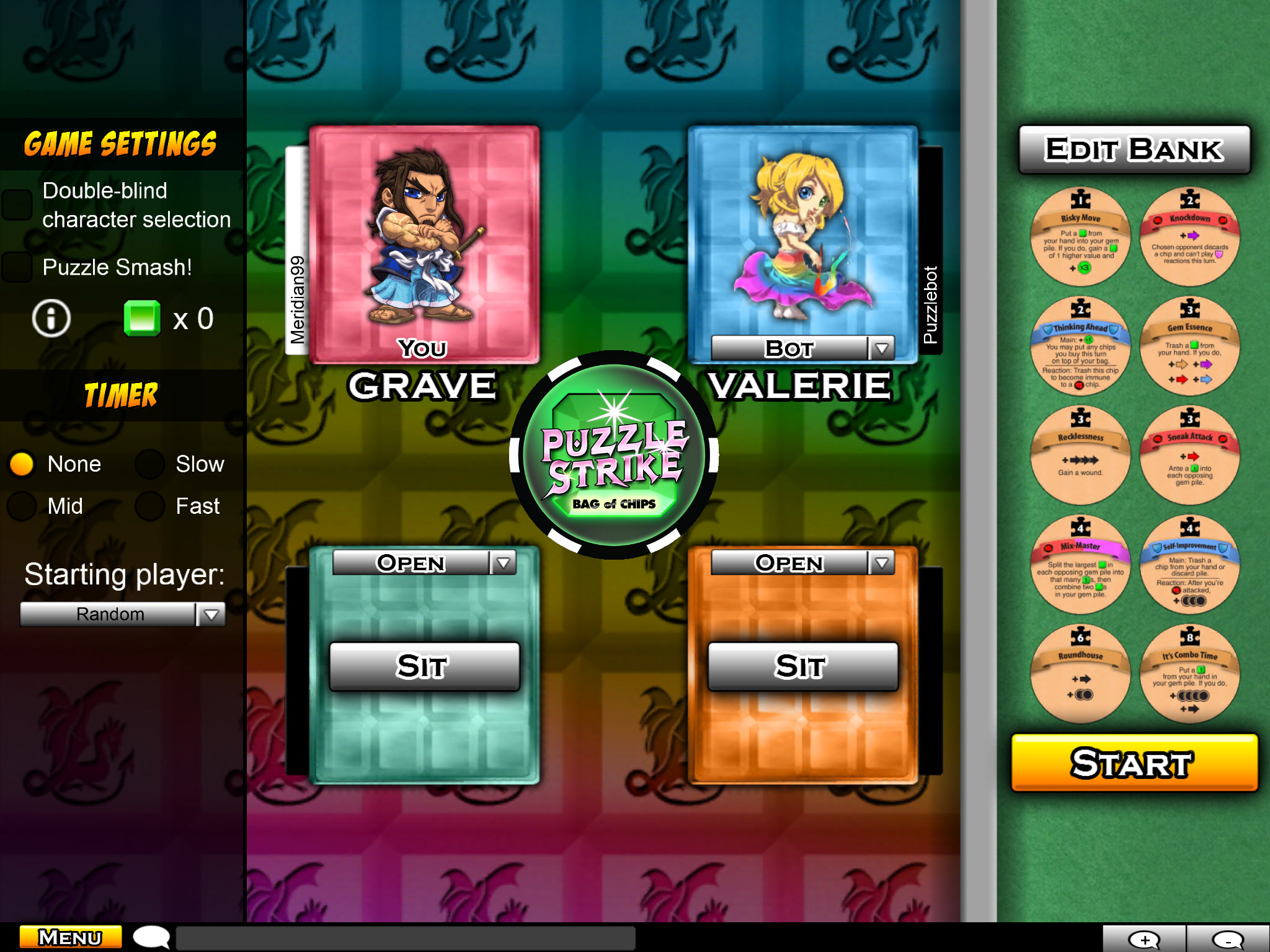 If you've never heard of Puzzle Strike, imagine a deckbuilding card game like Dominion [
Please, Log in or Register to view URLs content!
] or Ascension: Chronicle of the Godslayer [
Please, Log in or Register to view URLs content!
] but played with chips instead of cards. You pick one of the characters (the game comes with four but you can buy additional characters as IAPs), and start playing against one or more opponents. Each turn you get a specific amount of money (which depends on quite a few factors) which you can spend to buy other chips from the bank in an attempt to build a deck that doesn't completely suck. Chips allow you to play specific kinds of chips (the chips are divided by color), combine your attack gems, attack the opponent, and so on.

When you attack the other player, you send gems to crash on the other player's gem pile, and whoever has more than 10 gems at the end of his or her turn, loses. That's the game, in a nutshell, but as you can imagine, with over 30 different types of chips and with each character having his or her own character chips, the game can get quite complex and, at the same time, very satisfying. Add to that how you can play with 1-3 opponents, which substantially changes your strategy, and you can see how the game offers plenty of meat for those who enjoy complex strategic games that are, at the same time, pretty approachable. The interactive tutorial does a great job explaining the basics, but I wish the really good manual of the physical version had found its way to the iOS version. 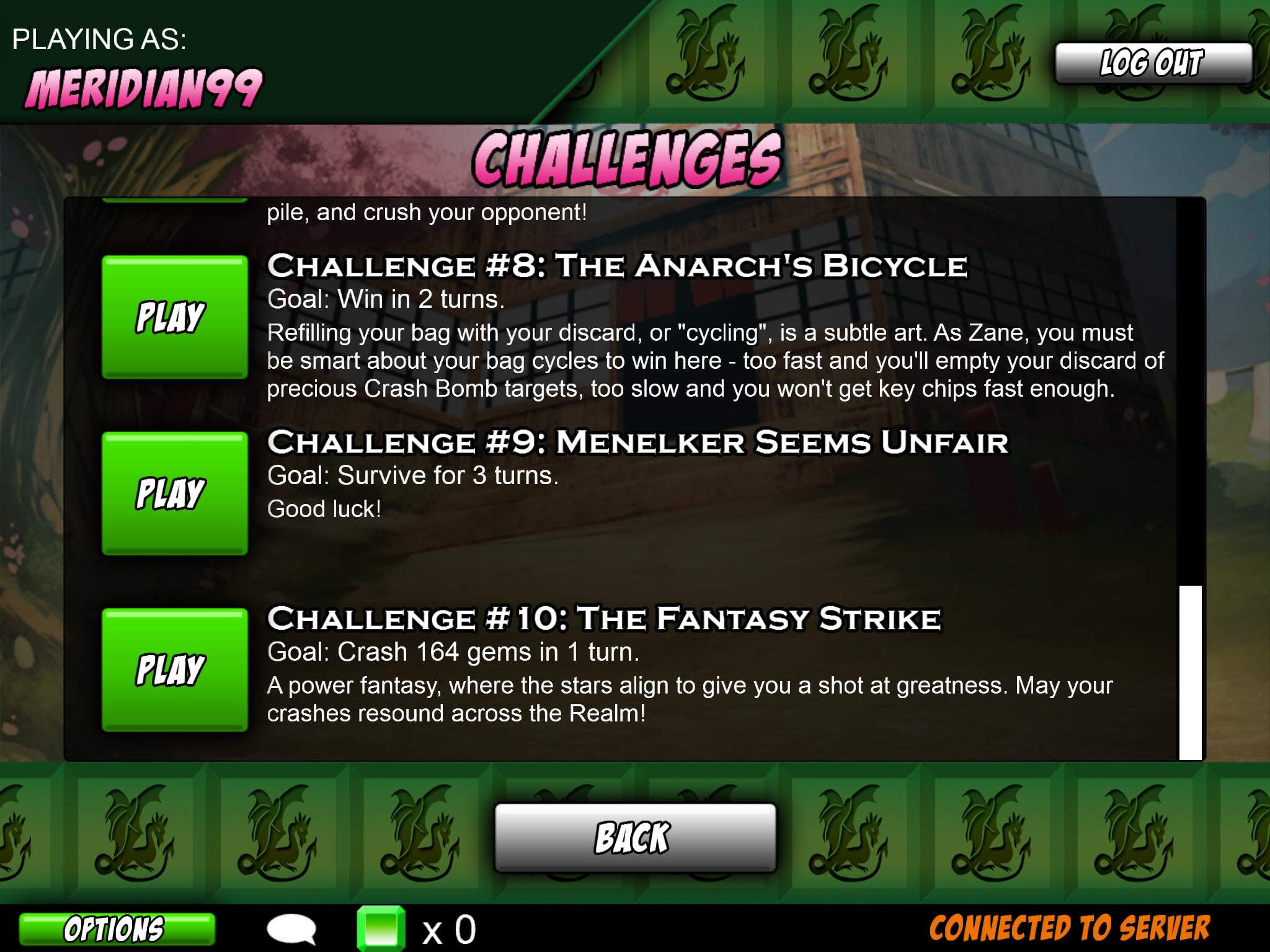 The iOS port of the game wasn't the easiest to pull off, I suppose, because of the sheer amount of information that needs to be on the board. There's the pretty big bank with 18 different chips, the 2-4 player cards - each with its gem pile, money information, and space for ongoing buffs - your own hand, the space that shows all the actions taking place, and so on. The developers went with a pretty faithful representation of what playing the physical version of the game would be, and while that will satisfy board game purists, I think they could have gone with slightly different design choices that would've made information more readily available. As it stands, there's too much screen space wasted.

For instance, on the Bank side of the board, the developers went with cascading chip stacks that indicate how many of the five chips are left. The result is players can't see the chip details clearly unless they zoom in (done by pressing on the chip). If they'd gone with a more 2D representation of the chips and simply added a numeric indicator, they would've had space to make the chips larger and, therefore, easier to read. Once you play the game for some time, you'll remember what each chip does without needing to read the text on it, but I think this is an example of how a more "digital" version of the board would've made the game easier to play, especially for beginners. 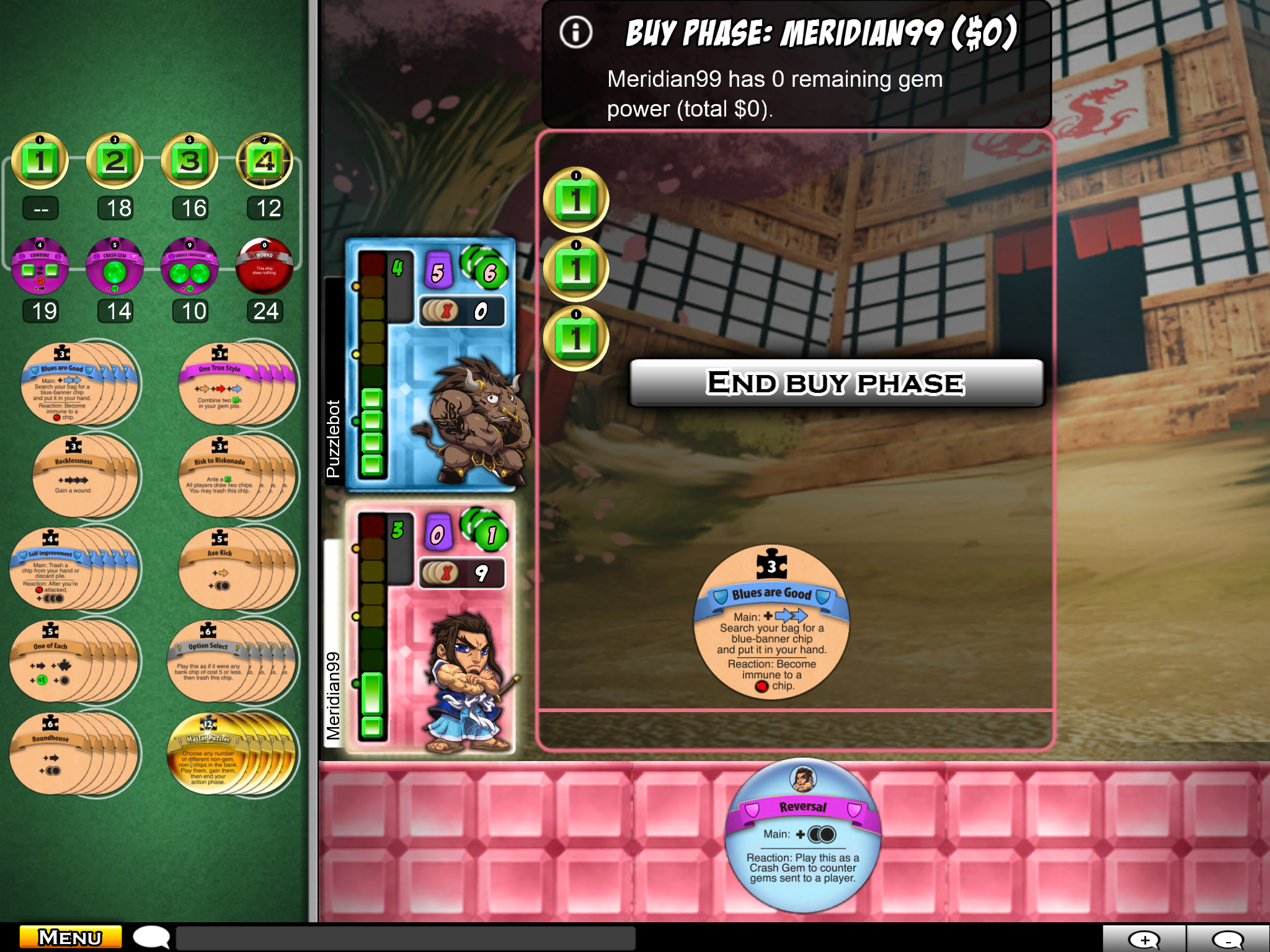 Of course, when developers go with that approach (the Agricola port, for instance), players often react quite negatively because they'd hoped for a representation faithful to the board game. So, it's not always an easy design choice. For what it's worth, I found these UI quirks less of an issue after only a couple of matches, so if you're thinking of getting the game, don't let the UI hold you back because it's pretty functional, even if not the best-designed on the App Store.

While there are some UI design choices I wasn't fully on board with, the game overall looks fine with sharp visuals, great-looking chips, and a nice color scheme that makes the overall game pleasant to look at. While this might sound like a small plus, when you're looking at what is a pretty static image (minus the chip and gem animations) for the whole time you're playing the game, pleasant color schemes matter. Speaking of the animations, the developers wisely chose to spice up the game's turns by animating the gem attacks. You'll see gem bars flying in the air, breaking up, and shooting at the other player's gem stack, and it's quite a nice little piece of visual flair. 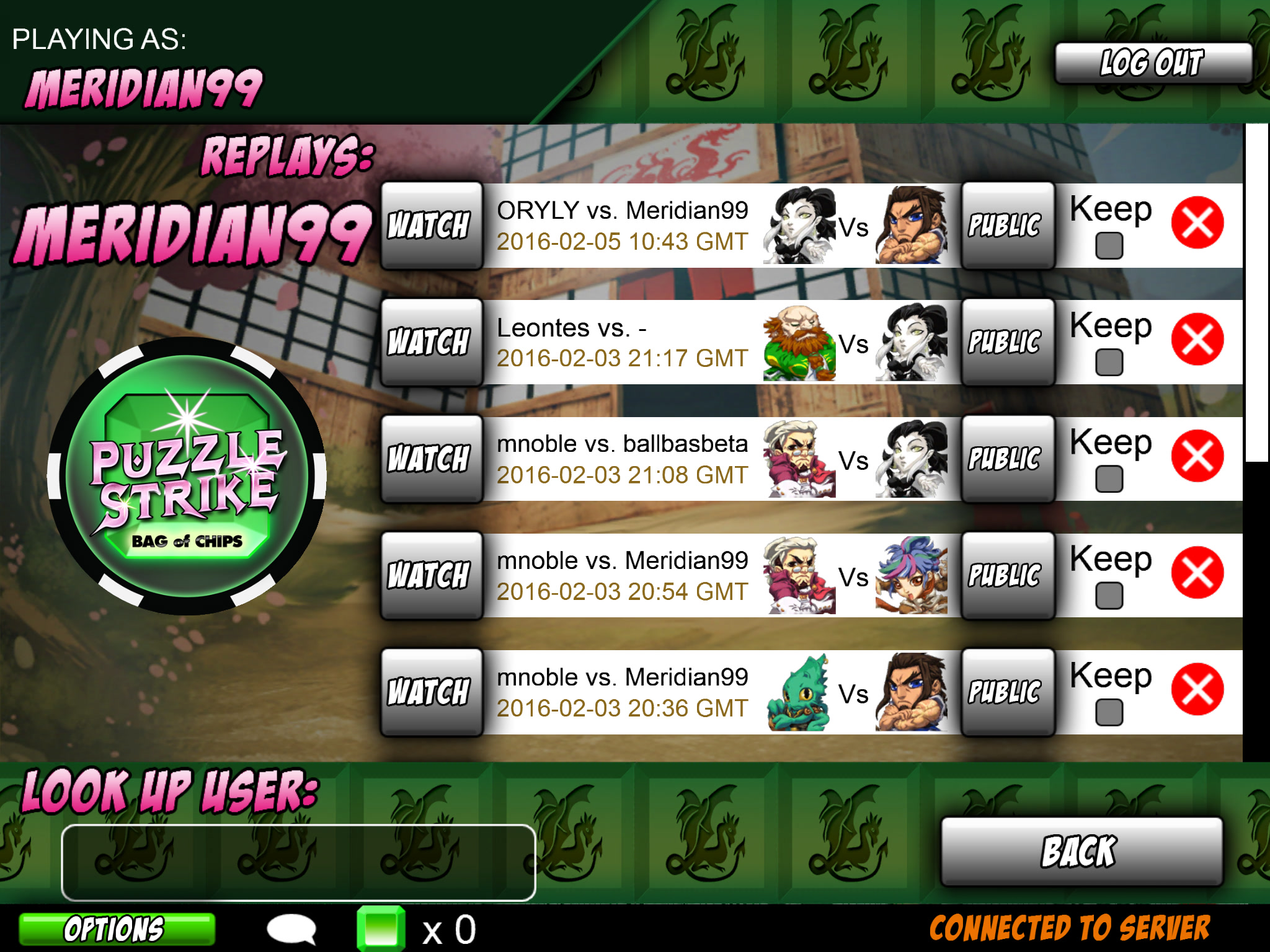 Now on to the really not-so-great parts of the port, and those stem from a lack of consideration of how mobile gamers use their devices. When you aren't actually in-game, you'll get no chat notifications or any other notifications for that matter. What that means is if someone wants to message you to play a match, you'll have no idea unless you happen to pop in the chat. Another example is if you want to start a match, you can't simply create a room and then pop out of the game; instead, you'll have to wait on that screen until another player jumps in. This kind of design works fine on the Steam version of the game (since you can simply minimize the window until you get a match), but on the iPad or iPhone it simply is a bit of a pain.

Add to this how the game has no friends list that I could find and doesn't connect to GameCenter, and you understand how you'll have to depend on the game's lobby and general chat to find matches. I don't think these decisions will help with the game's longevity, but hopefully the great gameplay will help players overlook these omissions. It's a pity, though, when developers don't go that extra step (which really should be a given in 2016) that would definitely boost a game's multiplayer credential and attract more players. To that point, I've seen some players complain about the lack of an asynchronous mode, but on this one I'm more with the developers because matches take just a few minutes, so I don't think an async mode was really necessary. 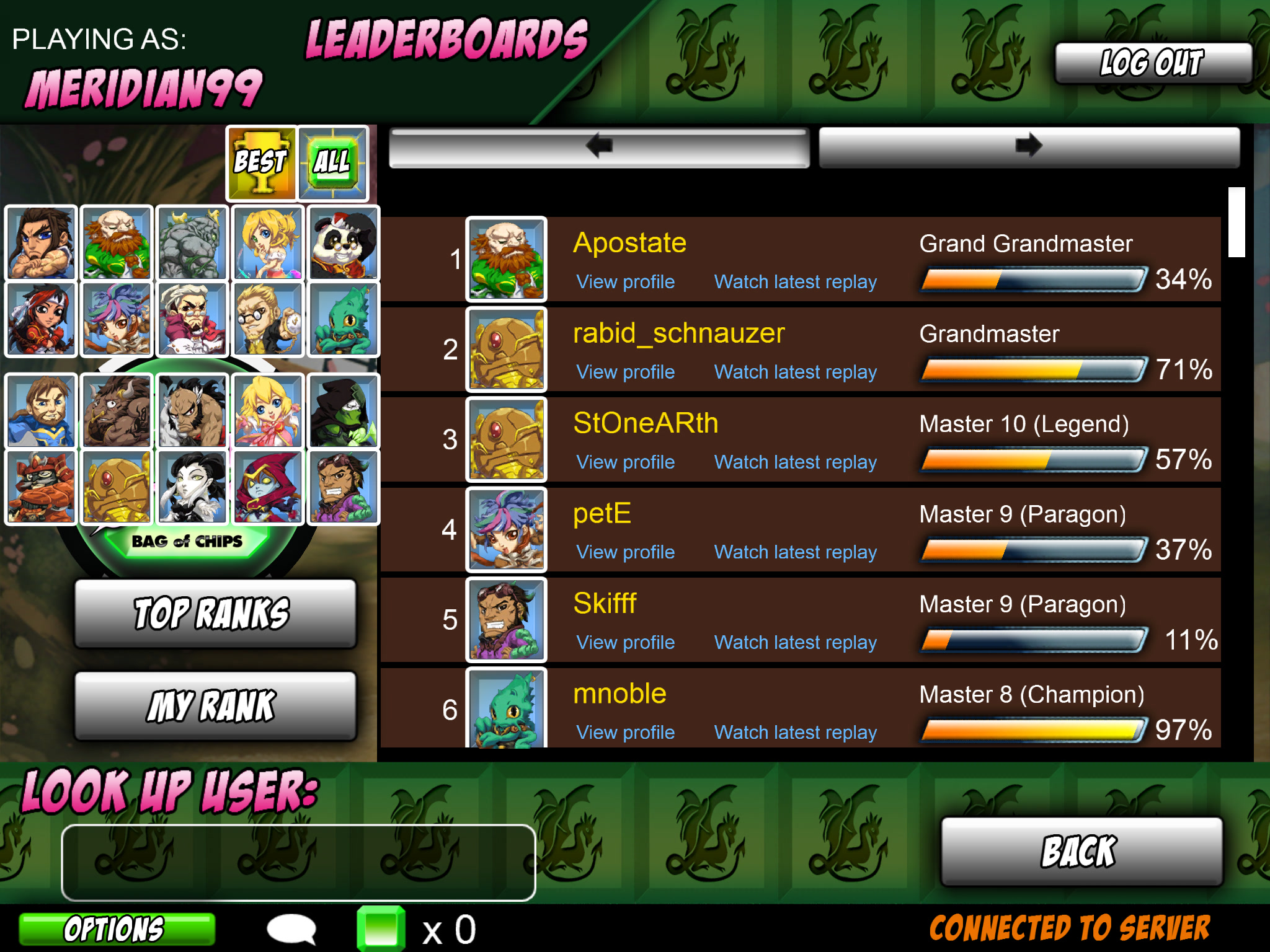 Not all is bad on the competitive side of things, though, because the game does offer cross-platform multiplayer with the Steam and web versions, very detailed leaderboards, a record of all your wins and loses, and the ability to watch replays of the last match of any of the players. This is a great teaching tool since you can see why the good players are so good and you, well, aren't. There's also the ability to spectate any match being played at the moment and chat with the players during the match. So yes, it's clear the game was built with a competitive environment in mind, which makes those omissions I mentioned earlier even more of a shame because they could have helped the game shine even more on mobile.

Despite these issues, Puzzle Strike is definitely a great game to play on your iPad since it looks sharp, plays very smoothly, and gives you so many choices and so many ways to play it that I doubt you'll get tired of it. As long as there's a good player base, of course, because as fun as the game is to play in single-player, it really shines when playing against other players. While some people have mentioned some server issues, I haven't had any at all in the last week or so I've been playing it, and ever since the iOS version came out, there's been a good number of opponents, so I'm hopeful that I'll continue to gracefully lose to many players in the future.


Please, Log in or Register to view URLs content!
The game is universal, and while I wasn't looking forward to playing it on my iPhone 6, I was actually surprised at how they managed to make it play on the smaller screen with no real issues (aside from those that are true for the iPad version, too). The game's $3.99 and comes with 4 characters, all of whom play quite differently and offer different kinds of challenges. You could really stick with those 4 forever and still have a blast playing the game. Still, the game offers 16 more characters that you could buy individually or in bundles (with the unlock-all-characters bundle costing $12.99).

If you haven't played a game like Puzzle Strike before, keep in mind that this game isn't like CCGs where you have to keep buying packs to build a decent deck; when you buy one character, you'll get all the chips that come with it. So, despite its imperfections, if you enjoy deckbuilding games that are easy to play at a basic level but have a pretty limitless skill ceiling and games that offer plenty of ways to play them both in single or multiplayer, get Puzzle Strike.

Survive a tension-filled underwater adventure in Freediver: Triton Down Extended Cut, out this week on PS VR